Construction of the Proton therapy center of Dr. Berezin Medical Institute (MIBS) began in 2012. As of today, proton radiation therapy is the most precise, safe and sparing cancer treatment method. After completion of the construction, start-up and final tune-in of the equipment, now the center works in a full operating mode. 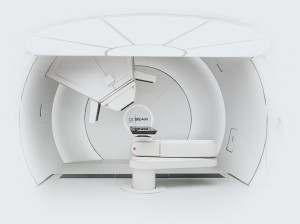 Proton therapy is the most modern form of radiation therapy, in which instead of traditional photons for radiation of malignant tumors a beam of positively charged protons is used. Due to the unique ability of these heavy particles to focus the dose of radiation directly on the tumor, damage to nearby healthy tissues is minimized.

The impact of protons on malignant cells has been studied for almost 70 years. In the laboratory environment, proton therapy was first used in the 1950s. In 1990 in the US the world's first clinical center of proton therapy started its work; thousands of people began to receive the innovative treatment annually. For a quarter of a century a large amount of data on the results of treatment of tumors using this method was accumulated, clinical studies comparing proton and photon therapy for different types of tumors were carried out.

In this section we bring to your attention translations of published scientific articles presenting the conclusions of the researchers regarding the effectiveness of proton therapy in the treatment of various cancers.